Securing power should be a cross-party priority this election

Heat and transport are becoming electrified, we’re taking coal and much of the existing nuclear capacity offline by 2032, and as new nuclear projects struggle to find finance a new strategy for securing additional power generation needs to come forward. How we achieve this should be central in the platforms of each of the UK political parties as we enter this general election.

There are many approaches to this, but each should contain a mix of solar, onshore and offshore wind, and bioenergy. In National Grid’s Future Energy Scenarios 2019, by 2050 to hit the Net Zero scenario an estimated 263GW of power generation capacity will be needed, against 108GW in 2018. These are ambitious targets, and given that the past three years has seen the removal of key policies that supported new generation (e.g. closure of the RO plus Pots 1 and 3 of the CfD auctions, removal of ring-fenced funds in Pot 2 CfD auctions, removal of LECs and other taxation support schemes) and installation rates for most renewable technologies have plummeted, we need to start a serious conversation about how to cover the gap. 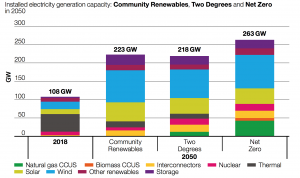 Now, many analysts have pointed out that we are moving towards a world of ‘subsidy-free’ wind and solar in the next few years. This is true, and the plummeting price of energy storage will enable many developments to go ahead without government support.

However, the scale of future deployment depends on a number of other factors, including grid charging (currently being reformed by Ofgem) and planning rules. And just because subsidy-free is possible it doesn’t mean that there isn’t a role for the state. Government-backed contracts that guarantee revenue certainty for developers could now become a source of cash for Treasury, as many companies would be willing to pay for effectively pay for these contracts in order to secure lower-cost finance.

Policy remains a major driver or brake on generation at every scale. The small-scale renewables sector is eagerly awaiting the Smart Export Guarantee, but whether what will be offered to the market will be robust enough to encourage new deployment remains to be seen.

Chart: impact of changes to the Feed-in Tariff on the deployment of low-carbon technologies 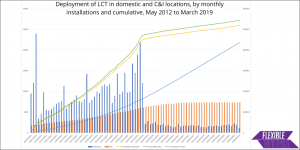 The move towards some projects being ‘subsidy-free’ also does not cover those technologies which are still in earlier stages of development, but should be part of an ambitious British industrial strategy. In many models Bioenergy with Carbon Capture and Storage, for example, will be needed globally to hit Net Zero but there has been limited progress to date in commercialising the technology. British companies earning a foothold in this market early could pay dividends in the medium to long term.

A joined up energy policy as part of the industrial strategy would also have onsite renewable energy generation for large Commercial and Industrial sites in its bullseye, to help these businesses both offset rising energy costs and reduce carbon.

Finally, as alluded to in the REA and ElectraLink’s Flexible Futures project, which for the first time publicly released data on the extent of electricity exports to the GB distribution networks by technology type, many of the Net Zero technologies that we need to deploy at scale are, and will likely continue to be, connected to the distribution (rather than transmission) network. This will require a sea-change in thinking about how we manage our networks, and any party’s energy policy needs to be backed up by rock-solid proposals that incentivise flexibility – primarily meaning storage, demand response, and smart EV charging. Without flexibility as the bedrock for policy we will be setting ourselves up for challenges in the mid 2020’s.

Chart: electricity exported to the GB distribution networks by type, 2012-2018 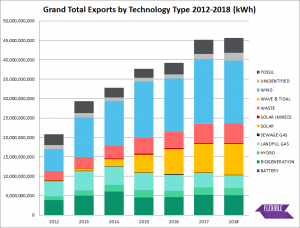 Securing new power generation capacity should be a priority for the next parliament.